An exercise in positioning for Lake of Bays Brewing Co.

As one of over 200 craft breweries in Ontario and over 100 slated to open this year, our client Lake of Bays Brewing Co. needed a way to stand out. Not only did Lake of Bays have a compelling story (the founder began brewing beer in his basement during his undergrad), they also had years of brand equity that could be built on and a solid red ale that had already differentiated them from other craft breweries. Now, it was time to introduce Lake of Bays 2.0 by repositioning the brand and refreshing the look and flavour of their products.

Our approach included consumer research, industry analysis and countless trips to the LCBO to determine how consumers choose craft beer and what drives purchasing decisions. We learned that in order to make our client relevant outside of Baysville where they’re located, we needed to showcase Lake of Bays as a relatable and go-to brand for the experiences they help cultivate. What better way to do this than to connect the scenic and aspirational Lake of Bays area with a product that has strong flavour and tastes good? This is how Taste the Great Outdoors, Lake of Bays Brewing’s new positioning, was born.

From this, all other marketing elements flowed. We started by renaming 3 of the 4 core brands. Spark House, a fan favourite, kept its name and was joined by Switchback (pilsner), Broken Axe (American pale ale) and Oxtongue (India pale ale). The brewery’s talented brewmaster and his team introduced more full-bodied and hoppy flavours while keeping Spark House’s tried and true recipe the same. All four cans were redesigned with custom artwork and a new colour palette to reflect iconic outdoor scenes from the Baysville area, paying homage to the brewery’s roots. The most successful launch of new core brands for the brewery was supported by an advertising campaign on the TTC, a social media campaign, a taster pack and other print assets.

The brewery isn’t stopping there. With plans to introduce a cider and some daring seasonal brews in the upcoming year, along with the debut of the Huntsville Brewhouse in 2018, Lake of Bays Brewing will hopefully cement its spot for yet another year as one of the top ten craft breweries in Ontario. 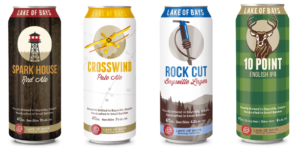 An exercise in industry disruption for Dolphin Gaming & Entertainment

Dolphin Gaming is a legacy gaming establishment in Scarborough. With a fiercely loyal customer base and welcoming staff, it is…

Marketing partnerships: a great way to boost your brand

I am a big fan of marketing partnerships, when done right, particularly for small businesses who have a limited marketing…

We’re a marketing company with an expert team that brings monumental impact to our clients and their businesses. Today, we’ve…